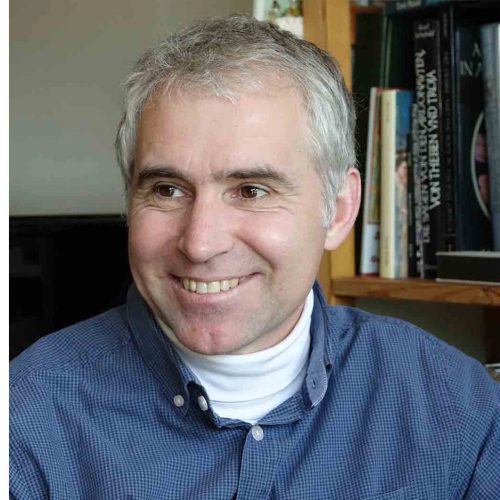 Dmitry Bondarev is a researcher and head of West Africa projects at the Centre for the Study of Manuscript Cultures, University of Hamburg. In the past he worked at SOAS, University of London, investigating annotations in early Nigerian Qur’anic manuscripts. His research interests cover African linguistics (Saharan, Chadic and Mande languages), literacy studies, especially in the context of Islamic exegetical traditions in African languages, the history of writing in Arabic based scripts (Ajami), and the palaeography and codicology of West African manuscripts. He has published extensively on these topics which he also develops in his teaching at the University of Hamburg. Bondarev’s international team of scholars conducts extensive studies on the Ajami manuscripts of the Sahelian Africa. This research can be followed on their blog “A-label: African Languages Between the Lines” https://ajami.hypotheses.org and Twitter @AjamiLab.

Old Kanembu, one of the earliest written languages of the Sahelian Africa, was used in the Qur’an manuscripts produced between the 17th and the early 19th centuries in the Borno Sultanate in what is now northeast Nigeria and southeast Niger. The manuscripts host dozens of Arabic tafsīr sources, testifying to a rich exegetical tradition going back many centuries. Old Kanembu survives in its modern-day offspring called Tarjumo, which is a formally acquired language used among the speakers of Kanuri and Kanembu in studying Arabic grammar and in ceremonial bilingual recitations of the Qur’an and other religious Arabic texts. Being a highly specialised linguistic code, Old Kanembu/Tarjumo is unintelligible to lay speakers and it is always dependent of the source Arabic text. However, Old Kanembu exerted influence beyond the exegetical context and there is evidence that a poetic register used for independent composition in vernacular drew on Old Kanembu grammar. This talk will look into a 19th-century manuscript with a poem written in modern Kanembu. The poem exhibits some grammatical features which are common in Old Kanembu of the Qur’an manuscripts. Why such features have not been retained in the modern-day Kanuri and Kanembu religious poetry remains an open question to which some ideas will be offered.

All Sessions by Dmitry Bondarev