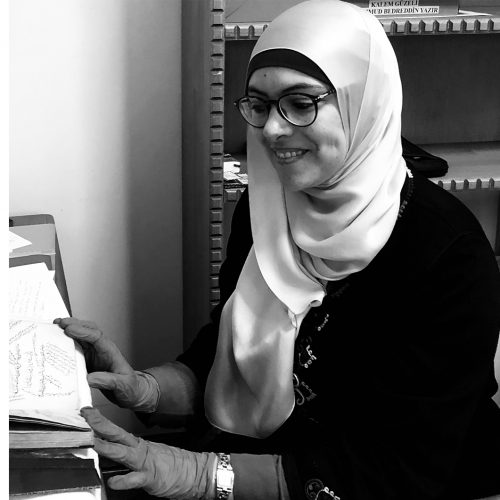 Zohra AZGAL is a PhD student at the Department of Historical and Philological Studies at the Université PSL (Paris Sciences et Lettres), where she is preparing her thesis at the École Pratique des Hautes Études in Paris under the supervision of Professor de Castilla. Her research field principally concerns the history of the transmission of the Qur’an and the qirā’āt in the Middle Ages, with a particular focus on the teaching manuals. To this end, she works through the medium of many different disciplines, such as codicology, philology, history and Qur’anic studies. She is also a lecturer in Qur’anic Sciences at the Institut al-Dānī in Paris.

Paper Abstract: The Qur’anic manuscripts of the 6th/12th century in Maghribi script.

Taking as our basis a corpus comprised of the oldest dated Qur’anic manuscripts in Maghribi script, we propose to make a contribution to the history of the written transmission of the Qur’an in what is now commonly known as the Muslim West. The attribution of certain manuscripts to imminent copyists, such as the Ibn Ghattus, who are not only copyists, but also illuminators and scholars acknowledged by the science of the qirā’āt, lends a certain added value to these manuscripts, which have long been underused by the academic world.

The many elements added (ḍabṭ) to the consonantal ductus of the text allow us to see it as more than a text captured on parchment (or, in some cases, paper), but as a spoken-word text. Indeed, the Western tradition stands out by the use of several colours and orthoepic symbols specific to it for the purpose of setting the text in the Nāfiʿ reading and making it illegible in others. The formal analysis of these elements and some codicological comments provide many insights into the unique nature of the manuscript production of the Qur’an at that time in that part of the Islamic world, as well as the nature of the Nāfiʿ reading in the 6th/12th century.

All Sessions by Zohra Azgal